Do’s & Don’ts of Learning to Play the Guitar

Do’s & Don’ts of Learning to Play the Guitar

Jimi Hendrix, Steve Vai, Eric Clapton, and Jimmy Page—these are some legends that etched their name into the pages of history by creating some of the most spine-tingling music the world had ever seen.

What did they have in common? Behind the success of all these legends, there was just one musical instrument—the guitar.

The guitar is perhaps the most well-known musical instrument there is. It’s an instrument that has connected people from all walks of life through music, generation after generation. In addition to being incredibly versatile and cost-effective, guitars are just cool as hell. Perhaps, this is why millions of people pick up a guitar each year and try to learn to play it.

However, the guitar is a complex instrument and mastering it can be quite challenging. But if you have the passion, and the will to put in the effort, you’ll be composing your own guitar hits in no time! Music Jotter’s music notation software provides all the features you need to become the next guitar playing sensation! Whether it’s acoustic, electric or bass guitars, here are some dos and don’ts of learning how to play.

Building a solid foundation is critical to becoming a good guitarist. Most beginners get discouraged and lose interest in the initial stages because the basics can be pretty boring and repetitive. However, that’s a short-sighted approach and you need to really stick with it to master an instrument. 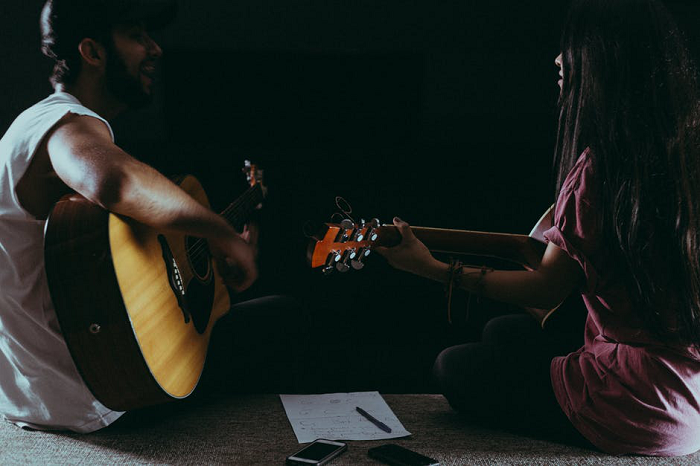 The guitar is a versatile instrument, but its versatility can only be explored once you have developed a firm grasp on the rudiments. Practice the basics and eliminate mistakes before you move onto more complex things.

Perhaps you’re inspired by Zakk Wylde and you want to be able to shred a lightning fast solo just like him. However, there is a long way to go before you can catch up with Mr. Wylde and his heady speeds of 200+ bpm. It took years and years of practice for even the best in the business to get to where they are. Practice perfecting your phrasing and tone at slow speeds, and gradually increase your speed as mistakes become less and less frequent.

Recording and listening to yourself playing can help you identify your mistakes and weaknesses, and give you a direction of focus. You don’t need a fully fledged recording studio to record tracks. You can record and listen to your tracks on your computer using Music Jotter’s realistic playback feature. Recording yourself is also a good way to keep track of your progress and development as a guitarist.

Learn and take inspiration from the guitar playing greats. Study their styles and techniques and observe their solos, structures, riffs, and licks. But don’t stop there! Once you have familiarized yourself with their work, practice putting your own unique spin on it by playing with the tempo, phrasing tone, and structure. The best training for any musician is exercising their creativity.

Listen to Many Styles

A lot of talented guitarists are sadly one-trick ponies because they stick to their favorite genre. If you want to become a guitar playing great, you need to be versatile. Expand your horizons by listening to different styles and genres. The diversity of the music you listen to has a huge impact on your creativity and playing style.

Music Jotter is music composition software that can help you become the Stevie Ray Vaughan of the 21st century! Download our free trial version and see for yourself!